At times you will want to turn a hand-drafted drawing into an AutoCAD drawing file. It may be that you are modifying a design you created before you started using AutoCAD, or that you are converting your entire library of drawings for future AutoCAD use. Or perhaps you want to convert a sketch into d formal drawing. This chapter discusses three ways to enter a hand-drafted drawing: tracing, scaling, and scanning. Each of these methods of drawing input has its advantages and disadvantages.

Scaling a drawing is the most flexible method because you don’t need a tablet to do it and generally, you are faced with less clean-up afterward. Scaling affords the most accurate input of orthogonal lines because-you can read dimensions directly from the drawing and enter those same dimensions into AutoCAD. The main drawback with scaling is that if the drawing does not contain complete dimensional information, you must constantly look at the hand-drafted drawing and measure distances with a scale. Also, Irregular curves are difficult to scale accurately.

Scanning offers some unique opportunities with AutoCAD 2000, especially if you have a lot of RAM and a fast hard drive. Potentially, you can scan a drawing and save it on your computer as an image file, and then import the image into AutoCAD and trace over it. You still need to perform some clean-up work on the  dawning, but because you can see your tracing directly on your screen, you better control and you won’t have quite as much cleaning up to do as you do when tracing from a digitizer.

There are also vectorizing programs that will automatically convert an image file into a vector file of lines and ‘arcs. These programs may offer some help, but will require the most cleaning up of the options presented here. Like tracing, scanning is best used for drawings that are difficult to scale, such as complex topographic a 1 maps containing more contours than are practical to trace on a digitizer, or nor. technical line art, such as letterhead and logos.

The most common method for entering a hand-drafted drawing into AutoCAD is tracing with a digitizer. If you are working with a large drawing and you have a small tablet, you may have to cut the drawing into pieces that your tablet can manage, trace each piece, and then assemble the completed pieces into the large drawing. However, the best solution is to have a  large tablet.

The following exercises are designed for 4 x 5 (10cm x 12,7cm) or larger tablet. The sample drawings are small enough to fit completely on this size of tablet. You can use either a stylus or a puck to trace them, but the stylus offers the most natural feel because it is shaped like a pen. A puck has cross hairs that you have to center on the line .you want to trace, and this requires a bit more dexterity.

Reconfiguring the Tablet for Tracing

When you first installed AutoCAD, you configured the tablet to use most of its active drawing area for AutoCAD’s menu template. Because you will need the tablet’s entire drawing area to trace this drawing, you now need to reconfigure the tablet to eliminate the menu. Otherwise, you won’t be able to pick points on the drawing outside the 4 x 3 (10cm x 7.0cm) screen, pointing ,area AutoCAD normally uses (see Figure 11.1). 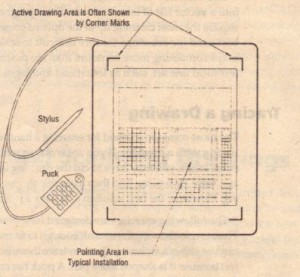 Now as you move your stylus or puck, you’ll notice a difference in the relationship between your hand movement and the screen cursor. The cursor moves more slowly and it is active. over more of the tablet surface.

calibrating the Tablet for Your Drawing

Now make a photocopy of Figure 11.2,which represents a hand-drafted drawing of a utility room for your apartment building. Place the.photocopied drawing on your tablet so that it is.aligned with the tablet and completely within the tablet’s active drawing area (see Figure 11.3).

Before you can trace anything-into your computer, you must calibrate your tablet, This means you must give some points of reference so AutoCAD tan know how distances on the tablet relate to distances in the drawing editor. For example, you may want to trace a drawing that was drawn at a scale of 1/8″=1′-0″. You will have to show AutoCAD two specific points on this drawing, as well as where those two points should appear in the drawing editor. This is accomplished by using the Tablet command’s Cal option. 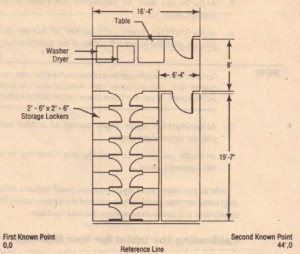 In Figure 11.2,we have already determined the coordinates for two points on a reference line. 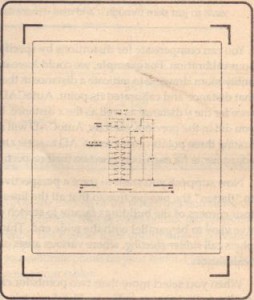 The word TABLET appears on the status bar to tell you that you are in Tablet mode. While in Tablet mode, you can trace the drawing but you cannot access the menus in Windows with some digitizers. (Check your digitizer manual for further information.) If you want to pick a menu item, you must toggle the Tablet mode off by using the F4 function key. Or you can enter commands through the keyboard. (If you need some reminders of the keyboard commands, type Help.J, and click Commands in the Help dialog box to get a list.)

II’ step 6 of the previous exercise, you bypassed the prompt that offered you the chance to calibrate a third point. In fact, you can calibrate as many as 31 points.

You can compensate for distortions by specifying several known points during your calibration. For example, we could have included a vertical distance on the utility room drawing to indicate a distance in the y-axis. You could have then picked that distance and calibrated its point. AutoCAD would then have a Point of reference for the y distance as well as the x distance. If you calibrate only two points, as . you did in the previous exercise, AutoCAD will scale x and y distances equally. Calibrating three points causes AutoCAD to scale x and y distances separately, making adjustments for each axis based on their respective calibration points.

Now suppose you want to trace a perspective view of a building, but you want to “flatten” the perspective so that all the lines are parallel. You can calibrate the four comers of the buildings facade to stretch out the narrow end of the perspective view to be parallel with the wide end. This is a limited form of what cartographers call rubber-sheeting, where various areas of the tablet are stretched by specific scale factors.

When you select more than two points for calibration, you will get a message similar to that shown in Figure 11.4. Let’s take a look at the parts of this message.

Just below each of these labels you will see either “Success,” “Exact,” or “Impossible.” This tells you whether any of these transformation types are available to you. Because this example shows what you see when you pick three points, you get Impossible for the projective transformation.

The far-left column tells you what is shown in each of the other three columns .

Finally, the prompt at the bottom of the screen lets you select which transformation type to use. If you calibrate four or more points, the projective transformation is added to the prompt. The Repeat Table option simply refreshes the table.

Take care when you calibrate points on your tablet. Here are a few things to watch out for when calibrating your tablet

Tracing Lines from a Drawing

Now you are ready to trace the utility room. If you don’t have’a digitizer, you can skip this exercise. A traced file is included on the companion CD-ROM that you can use for later exercises.

At this point, your drawing should look something like the top image of Figure 115-a close facsimile of the original drawing, but not as exact as you might like. Zoom in to one of the doors. Now you can see the inaccuracies of tracing. Some of the lines are crooked, and others don’t meet at the right points. These inaccuracies are caused by the limited resolution of your tablet, coupled with the lack of steadiness in the human hand. The best digitizing tablets have an accuracy of 0.001 inch, which is actually not very good when you are dealing with tablet distances of l/S” and smaller. In the following section, you will  clean up your drawing.

Cleaning Up a Traced Drawing

In this section, you’ll reposition a door jamb, straighten some lines, adjust a dimension, and add the storage lockers to the utility room. If you didn’t have a chance to digitize your own Utility file, use the file 11a-util.dwg from the companion CD-ROM to do the following exercises. 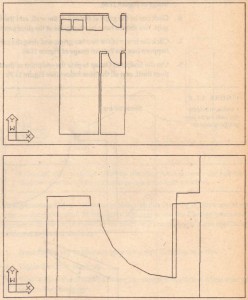 Moving the End of a Wall In Figure 11.5,one of the door jambs is not in the right position (the bottom image gives you the best look). In this next exercise, you will fix this by repositioning a group of objects while keeping their vertices intact, using the Grips feature.

As you have just seen, you can use the Change command to quickly straighten a set of lines. When used carefully, this command can be a real time-saver.

You also can extend several lines to be perpendicular to a nonorthogonalline. To .do so, you have to rotate the cursor to that line’s angle (see the top image in Figure 11.9),using the Snapang system variable. You can also use the Snap Angle input box in the Tools > Drawing Aids dialog box to rotate the cursor.) Then use the process just described to extend or shorten the other lines (see the bottom image of Figure 11.9).

When changing several lines to be perpendicular to another line, you must carefully choose the new endpoint location. Figure 11.10 shows what happens to the same line shown in the top image of Figure 11.9 when perpendicular reference is placed in the middle of the set of lines. Some lines are straightened to a perpendicular orientation, while others have the wrong endpoints aligned with the reference line.

Before moving on to the next section, use the Change command to straighten the other lines in your drawing. Start by straightening the comer to the right of the door in Figure 11.8.

Adjusting the Room Size The overall interior dimension of the original utility room drawing is 16′-4″x 28′-0″ Chances are that the dimensions of the drawing you traced will vary somewhat from these. You will need to adjust your drawing to fit these dimensions .

Finally, you may want to add the dimensions as shown earlier in Figure 11.2.

In the first exercise of this chapter, you traced on entire drawing. However, you could have just tracing major lines with the Ortho mode on, and then used the Offset command to~ the wall thickness, The Fillet and Trim commands (see Chapter 5) could then be used to clean up the drawing where lines cross or where they don’t meet.

If you are a civil engineer, you would take a different approach. In laying out a road, for instance, you might first trace the center lines, and then use the Offset option on the Modify toolbar to place the curb and gutter, You could trace curved features using arcs (just to see what the radius of the curve is), and then redraw the arc accurately, joining straight-line segments. The digitizer can be a great tool it is used with care and a touch of creativity.