There are several advantages to using external reference files. Because the Xrefs don’t become part of the drawing file’s database the referencing files remain quite small.Also because Xref files are easily updated work can be split up among several people in a workgroup environment or on a network. For example in our hypothetical apartment building one person can be editing the Common file while another works on Floorl and so on. The next time the composite Xref-l. dwg or Xref- 2. dwg file is opened it will automatically reflect any new changes made in the external referenced files. Now let’s see how to set this up.

1. Open the Common.dwg file.
2. Next you will update the Unit plan you edited earlier in this chapter. Click Insert Block on the Draw toolbar.

3. In the Insert dialog box, click the File button and then locate and select Uni t .dwg. Then click Open here and again in the Insert dialog box.
4. At the warning message click OK.
5. At the Inserti on poi nt: prompt press the Ese key.
6. Enter REJ to regenerate the drawing. You will see the new Unit plan in place
of the old one (see Figure 12.28). You may also see all the dimensions and
notes for each unit.
7. If the Notes layer is on, use the Layer & Linetype Properties dialog box or
the Layer drop-down list to turn it off.
8. Using the Insert Block tool on the Draw toolbar again, replace tjle empty room \ across the hall from the lobby with the utility room you created in Chapter 11 (see Figure 12.29). If you didn’t create the utility room drawing, use the Uti 1- ity .dwg file from the companion CD-ROM. 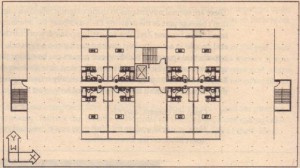 FIGURE 12.28:
9. save the Common file.
10. Now open the Xref-l file. You will see the utility room and the typical units in
their new form. Your drawing should look like the top image of Figure 12.30.
11. Open Xref-2. You see that the utility room and typical units are updated in
this file as well (see the bottom image of Figure 12.30).
The Common file with the
revised Unit plan 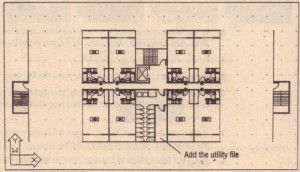 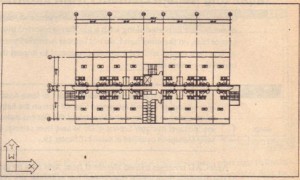 FIGURE 12.30:
If this were a typical manually drafted project, someone would have had to make
changes to both plans shown in Figure 12.30, duplicating a great deal of work.
The Xref-1 file with the
units updated 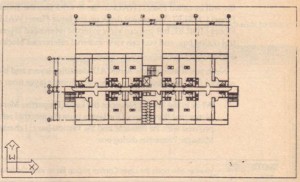 If this were a typical manually drafted project someone would have had to make changes to both plans shown in Figure 12.30 duplicating a great deal of work.

Chapter 5 discussed’ how layers blocks line types and text styles=-called named elements-are imported along with a file that ~sinserted into another. External reference files on the other hand do not import named elements. You can, however review their names and use a special command to import the ones you want to
use in the current file.

You can set the Visretain system variable to 1 to force AutoCAD to remember layer settings of external referenced files. Or turn on the Retain Changes to Xref layers option in the Open and Save tab of the Options dialog box. You can also use the layer Manager Express utility to save layer settings for later recall. The layer Manager is described in detail in Chapter 19..

AutoCAD renames named elements from Xref files by giving them the prefix of the filename from which they come. For example, the Wall layer in the Floorl file will be called Floorl ]WALL in the Xref-l file; the Toilet block will be called Floorl ] TOILET. You cannot draw on the layer Floor IWALL, nor can you insert Floorl ]TOILET but you can view external referenced layers in the Layer Control  dialog box and you can view external referenced blocks using the Insert dialog
box.

Next you’ll look at how AutoCAD identifies layers and blocks in external referenced files, and you’ll get a chance to import a layer from an Xref.

1. While in the Xref-l file, open the Layer Properties Manager dialog box. Notice that the names of the layers from the external referenced files are all prefixed with the file name and the vertical bar ( I)character. Exit th Layer Manager Properties dialog box.

You can also open the layer Control popup list to view the layer names.

2.Click the External Reference Bind tool on the Reference toolbar or enter Xb.J.

see a listing of the current Xrefs. Each listing shows a plus sign to the left. This list box tollows the Microsoft Windows 95 format for expandable lists much like the directory listing in the Windows Explorer.
3. Click the plus sign next to the Floorl Xref listing. The list expands to show the types of elements available to bind

5. Locate Ploorl ]WALL in the listing, click it, and then click the Add button. Floorl ]WALL is added to the list to the right: Definitions to Bind.
6. Click OK to bind the Floorl ]WALL layer.
7. Now open the Layer & Linetype Properties dialog box.
8. Scroll down the list and look for the Flcorl ]WALL layer. You will not find it. In its place is a layer called Floorl$O$wall.

The.AutoCAD DesignCenter lets you import settings and other drawing components from any drawing, not just Xref drawings. You’ll learn more about the Auto- CAD pesignCenter in Chapter 22.

As you can see, when you use Xbind to import a named item, such as the Floor l ] WALL layer the vertical bar (I) is replaced by two dollar signs surrounding a number which is usually zero. (If for some reason the imported hiyer name Floorl$O$wall already exists then the zero in that name is changed to I as in F1oorl$l$wall.) Other named items are also renamed in the same way using the SOSreplacement for the vertical bar.

While you used the Xbind dialog box to bind a single layer you can also use it to bind multiple layers as well as other items from Xrefs attached to the current drawing.

TIP
You can bind an entire Xrefto a drawing, converting it into a simple block. By doing so you have the opportunity to maintain unique layer names of the Xref being bound or merge the Xref’ssimilarly named layers with those of the current file. See Chapter 6 for details