The Osnap Tracking vector only comes into play after you’ve placed an Osnap marker on a location, in this case, the corner of the bathroom. It won’t appear at any other time, If you have both Running Osnaps and Osnap Tracking turned on, you’ll get the tracking vector every time the cursor lands on an Osnap location, This can be a bit confusing to novice users, so you may want to use Osnap Tracking sparingly urftil you become more comfortaple with it

Also, since Polar Tracking uses a tracking vector, you may get the two confused: Remember that Polar Track:ng lets you point the cursor in a specific direction while selecting points. If you’re an experienced AutoCAD user, you can think of it as a more intelligent Ortho rnoce. On the other hand, Osnap Tracking leis you align points to Osnap locations. Experienced AutoCAD users can think of Osnap Tracking as a more intelligent XYZ filter option.

Cleaning Up the Line Work

You’ve drawn some of the wall lines, approximating their endpoint locations. Next you will use the Fillet command to join lines exactly end

Now import the Kitchen plan you drew earlier in this chapter

1. Click Insert Block on the Draw toolbar, then click Browse and locate the kitchen drawing you created earlier in this chapter. Make sure you leave the Specify On-Screen option unchecked under the Scale and Rotation button groups of the Insert dialog box.
2. Place the kitchen drawing at the wall intersection below the bathtub (see the top image of Figure 5.15).

3. Adjust your view with Pan and Zoom so that the upper portion of the apart .ment unit is centered in drawing area, as illustrated in the top image of FigureS. IS. 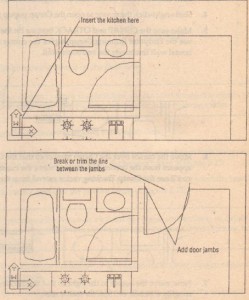 In this exercise, you’ll use a number of new tools together to streamline the drawing process. You’ll practice using the Osnap Tracking feature and the From Osnap option to place the entry door at an exact distance from the upper comer of the floor plan.
1. Open the Insert dialog box again by right-clicking the Command window. Select Recent Commands >Insert from the popup menu.
2.. Select Door from the Name drop-down list.
3. Make sure the Specify On-Screen option is checked for the Rotation button group and Specify On-Screen is not checked in the Scale button group, then click OK. You’ll see the Door follow the cursor in the drawing window.
4. Shift+right-click the mouse to open the Osnap popup menu, then select From.
5. Make sure the OSNAP and OlRACK buttons on the status bar are on, then use the Endpoint Running Osnap to pick the comer where the upper horizontal wall line meets the bathroom wall.

Now add the finishing touches to the entry door.

1. Add 5″ (13cm for metric users) door jambs and change their layer property to  Jamb layer, as shown in the bottom image of Figure 5.15.
2. Choose the Break tool in the Modify toolbar, and then select the head. over the entry door (see the bottom image of Figure 5.15).
3. Type FJ to use the first point option; then select the endpoint of one of the doorjambs.
4. At the Speci fy second break poi nt: prompt, select the endpoint of the other jamb as shown in the bottom image of Figure 5.15.
5. Draw the door heade; on the Ceiling laver, as shown in Fig~re 5.16
6. Click Offset on the Modify toolbar and offset the top wall lines of the unit and the door header up 5″ (13ern for metric users), so they connect with the top en:l of the door jamb, as shown in Figure 5.16. Don’t forget to include the she rt wall line from thedoor to the bathroom wall.
7. Use Fill >- Save As to save your file under the name Unit. 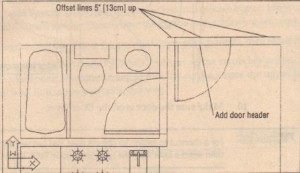