There are many ways to create a curve in AutoCAD. If you don’t need the representation of a curve to be exactly accurate, you can use a polyline curve. In the following exercise, you will draw a polyline curve to represent a contour on a topographic  map.

1. Open the Topo dwg drawing that is included on the CD-ROM that comes with this book. The top image of Figure 13.8 contains the drawing of survey data. Some of the contours have already been drawn in between the data points.
2. Zoom into the tipper-right comer of the drawing, so your screen looks like the bottom image of Figure 13.8.
3. Click the Polyline tool in the Draw toolbar. Using the Center Osnap, draw a polyline that connects the points labeled “254,00,” Your drawing should look like the continued image of Figure 13.8,
4.’ When you have drawn the polyline, press .J, 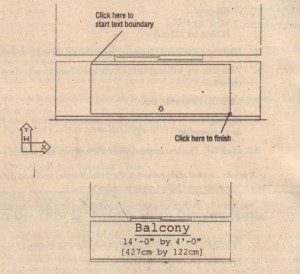 Next you will convert the polyline you just drew into a smooth contour line.

1. Choose Modify > Polyline, or type Pe•.J..
2. At the PEOIT Select objects: prompt, pick ithe contour line you just drew.
3. . At the prompt
Enter an option [close/JoinjWidth/Edit vertex/Fit/Spline/
Decurve/Ltype gen/Undo]:
press F.J to select the Fit option. This causes the polyline to smooth out into a series of connected arcs that pass through the data points.

Turning Object into polylines and polylines into sublines.

One o(the Pedit options that hasn’t yet been discussed. Edit Vertex, is almost like a command within a command.Edit Vertex has numerous suboptions that allow

polyline to designate its beginning. As you select Next or Previous, theX moves from vertex to vertex to show which one is being edited. Let’s try this out.
1. Press .J a couple of times to move the X along the polyline. (Because Next is the default option, you only need to press u to move the X.)
2. ,rype p.J for Previous. The X moves in the opposite direction. Notice that now the default option becomes P.

1. Position the X on one end of the segment you want to break.
2. Enter B.J at the command prompt.
3. At the Enter an option [Next/Previous/Go/eXit] <N>: prompt,use
Next or Previous to move the X to the other end of the segment t~ be broken.
4. When the X is in the proper position, pick Go from the Edit Vertex menu or enter G.J, and the polyline will be broken

1. Position the X on one end of the segment you want to break.
2. Enter B.J at the command prompt.
3. At the Enter an option [Next/Previous/Go/eXit] <N>: prompt,use Next or Previous to move the X to the other end of the segment to be broken.
4. When the X is in the proper position, pick Go from the Edit Vertex menu or enter G.J, and the polyline will be broken. 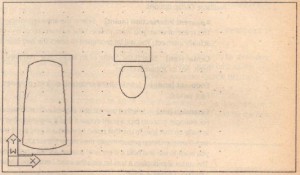 Notice that the inserted vertex appears between the currently marked vertex and the next vertex, so the Insert option is sensitive to the direction. of the polyline. If the polyline is curved, the new vertex will not immediately be shown as curved (see the top image of Figure 13.11).You must smooth it out by exiting the Edit Vertex option and then using the Fit option, as you did to edit the site plan (see the bottom image).You can also use the Stretch command (on the Modify toolbar) to move a polyline vertex. Move In this brief exercise, you’ll use the Move option to move a vertex.

1. Undo the inserted vertex by exiting the Edit Vertex option (X.J) and typing U.J.
2. Restart the Edit Vertex option, and use the Next or Previous option to place the Xon the vertex you wish to move.
3. Enter MJ for the Move option.
4. When the Spedfy new location marked vertex: prompt appears, along with a robber-banding line originating from the X(see the top image. pick the new vertex. The polyline is redrawn (see the bottom image of Figure 13.12).Again, if the line is curved, the ‘new vertex appears as a sharp angle until you use the Fit option

Straighten The Straighten option straightens all the vertices between two selected vertices, as shown here in the following exercise.

1. Undo the moved vertex (from the previous exercise),
2. Start the Edit Verte~.option again, and select the starting vertex for the straight line.
3. Enter S.J for the Straighten option.
4. At the Enter option [Next/Prevous/Go/eXit) <N>: prompt, move the Xto the location for the other end of the stra~ght-line segment.
S. Once the X is in the proper position, enter G..Jfor the Go option. The polyline straightens between the two selected vertices. 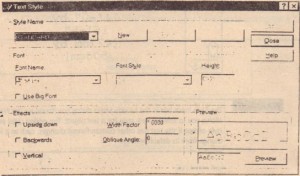 Tangent The Tangent option alters the direction of a curve on a curve-fitted polyline.
1. Undo the straightened segment from the previous exercise.
2. Restart the Edit Vertex option, and position the X on the vertex you toalter.
3. Enter T.J for the Tangent option. A rubber-banding line appears.
4. Point the rubber-banding line in the direcnon for the new tangent, and click the mouse. An arrow appears, indicating the new-tangent direction:

Don’t worry if the polyline shape does not change. You must use Fit to see the effect of Tangent.

Width Finally, try out the Width option. Unlike the Pedit command’s Width option, the Edit Vertex/Width option enables you to alter the width of the polylin at any vertex. Thus, you can taper or otherwise vary polyline thickness.

1 Undo the tangent arc from the previous exercise.
2 Return to the Edit Vertex option, and place the X at the beginning vertex of a
3 polyline segment you want to change.
4 Type W.J to issue the Width option.
5 At the Specify start; ng w; dth for next segment <0.0000>: prompt,
enter a value, 12 for example, indicating the polyline width desired at this  vertex.

Again (as with Tangent), don’t be alarmed if nothing happens after you enter this Width value. To see the result, you must exit the Edit Vertex command.

Posted on November 9, 2015 in Drawing Curves and Solid Fills

Improving Your Image and Editing
Creating a Polyline Spline Curve