In the last example, you used the Edge Surface tool to create a 3D surface. There are several other 3D surface commands available that allow you to generate complex surface shapes easily.

1. Open the file called Rulesurf .dwg from the companion CD-ROM. It looks like the top image.This drawing is of a simple half-circle, drawn. using a line and an arc. Ignore the diagonal blue line for now.

2. Move the line between the arc endpoints 10 units in the z-axis.

3. Now you are ready to connect the two objects with a 3D surface. Click the Ruled Surface tool on the Surfaces tooIbar, or choose Draw >- Surfaces >- Ruled Surface.

4. At the Select first defining curve: prompt, place the cursor toward
the right end of the arc and click it.

5. At the Select second defining curve: prompt, move the cursor toward the right end of the line and click it, as shown in the bottom image.The surface will appear as shown. 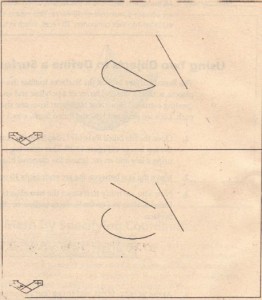 The location you use to select the two objects for the ruled surface is important. You injected specific locations on the arc and line so that the ruled surface is , generated properly. Had you selected the opposite end of the line, for example, your result would look more like. Notice that the segments defining the surface cross each other. This crossing effect is caused by picking the defining objects near opposite endpoints. The arc was picked near its lower end, and the line was picked toward the top end. At times, you may actually want this effect. 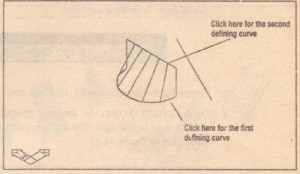 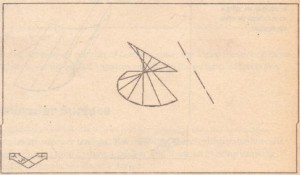 Extruding an Object along a Straight Line

1. While still in the Rule surf drawing, click the Undo button in the Standard toolbar to undo the ruled surface from the previous exercise. 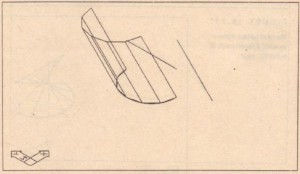 The direction vector can be any object, but AutoCAD will,only consider the object’s two endpoints when extruding the path curve. Just as with the Ruled Surface tool, the point at which you select the direction vector object affects the outcome of the extrusion. If you had selected a location near the top of the blue line, the extrusion would have gone in the opposite direction from the exercise.

Since the direction vector can point in any direction, the Tabulated Surface tool allows you to create an extruded shape that is not restricted to a direction perpendicular to the object being extruded.

The path curve defining the shape of the extrusion can be <in are, cinle, line, or polyline. You can use a curve-fitted polyline or a spline polyline to create more complex shapes, as shown. 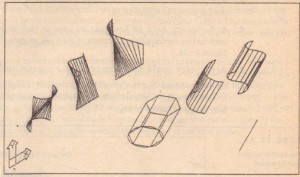 1. Open the Pitcher . dwg file from the companion CD-ROM. This file contains a polyline profile of a pitcher as well as a single line representing the center of the pitcher. The profile and line have already been rotated to a position that is perpendicular to the WCS. The grid is turned on so you can better visualize the plane of the WCS.

2. Click the Revolved Surface tool on the Surfaces Toolbar.

3. At the Select Path Curve: prompt, click the polyline profile, as shown in the top image.

4. At the Select Axis of Revolution: prompt, click near the bottom of the vertical line representing the center of the vase, as shown in the top image.

6. At the Included angle (+-ccw, -:sew) <Full circle>: prompt,press↵
to accept the Full Circle default. The pitcher appears, as shown in the bottom image. 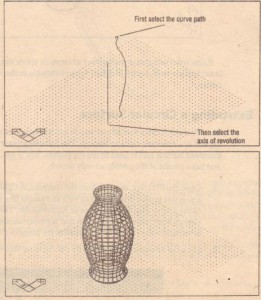 Notice that the pitcher is made up of a faceted mesh, like the mesh that is created by the Edge Surface tool. Just as with the Edge Surface tool, you can set the number of facets in each direction using the Surftab1 and Surftab2 system variable settings. Both Surftabl and Surftab2 were already set to 24 in the Pitcher. dwgfile,
so the pitcher shape would appear fairly smooth,

You may have noticed that in steps 5 and 6 of the previous exercise, you have a .few options. In step 5, you can specify a start angle. In this case, you accepted the o default. Had you entered a different value, 90 for example, then the extrusion would have started in the 90° position relative to the current WCS. In step 6, you
have the option of specifying the angle of the extrusion. Had you entered 180, for example, you result would have been half the pitcher. You can also specify the direction of the extrusion by specifying a negative or positive angle.