AutoCAD provides two tools for moving objects in 3D space: Align and 3D Rotate. Both of these commands are found on the Rotate fly out of the Modify toolbar, They help you perform some of the more common moves associated with 3D editing.

In mechanical drawing, you often create the parts in 3D and then show an assembly of the parts. The Align command can greatly simplify the assembly process. The following exercise describes how Align works.

3. At the 1st source point: prompt, pick a point on the source object that is at the first point of an alignment axis, such as the center of a hole or the comer of a surface.

5. At the 2nd source point: prompt, pick a point prl the source object that is the second point of an alignment axis, such( Other  center point or other corner of a surface.

7. At the 3rd source point: prompt, you can press .J if two points are adequate to describe the alignment. Otherwise, pick a third point on the source object that, along with the first two points, best describes the surface plane you want aligned with the destination object.

it gives some examples of how the Align tool works. 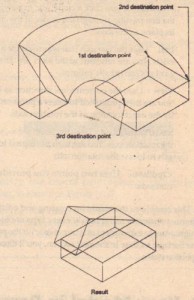 Rotating an Object in 3D

If you just want to rotate an object in 3D space, the Modify > 3D Operation> Rotate 3D option on the menu bar can simplify the operation. Once you’ve selected this option and selected the objects you want to rotate, you get the following prompt:

This prompt is asking you to describe the axis of rotation. Here are descriptions of the options presented in the prompt:

Entity Allows you to indicate an axis by clicking an object. When you select this option, you are prompted to pick a line, circle, arc, or 20 polyline segment. If you click a line or polyline segment, the line is used as the axis of rotation. If you click a circle, arc, or polyline arc segment, AutoCAD uses the line passing through the center of the circle or arc and perpendicular to its plane as the axis.

Last Uses the last axis that was used for a 3D rotation. If no previous axis exists, you are returned to the Axis by Entity/Lasr/View/Xaxis/YAxis/
Zaxis/<2points>: prompt.

<2points> Uses two points you provide as the endpoints of the rotation axis.

This completes the lesson on creating and editing 3D objects. You have had a chance to practice using nearly every type of object available in AutoCAD. You might want to experiment on your own with the predefined 3D shapes offered on the Surfaces toolbar. In the next section, you’ll discover how you can generate perspective views.