So far, you have been creating 3D models according to a method called surface modeling: As you drew, you used 3D Faces to give your models form and the appearance of solidity. But there is another method that you can use to create 3D computer , models: solid modeling.

With surface models, drawing a simple cube requires several steps; with solids,you can create a cube with one command. Having created a solid model, you can assign materials to it and have the computer find physical properties of the model, such as weight and center of mass. It is easier to create models by using solid modeling, and there are many advantages to the technique, especially in mechanical design and engineering.

Solid modeling was once thought to require more computational power than most personal computers could offer, but with today’s powerful microcomputer hardware, solid modeling is well within the reach of most PC users. AutoCAD offers built-in solid modeling functions, which you will explore in this chapter.

Solid modeling is a way of defining 3D objects as solid forms rather than as wireframes with surfaces attached. When you create a 3D model using solid modeling, you start with the basic forms of your model cubes, cones, and cylinders, for instance. These basic solids are called. primitives. Then, using more of these primitives, you begin to’ add to or subtract from your basic forms. For example, to create a model of a tube, you first create two solid cylinders, one smaller in diameter than the other. Then you align the two cyIlnders so they are concentric and tell AutoCAD to subtract the smaller cylinder from the larger one. The larger of the two cylinders then becomes a tube whose inside diameter is that of the smaller cylinder, as shown in Figure 18.1. 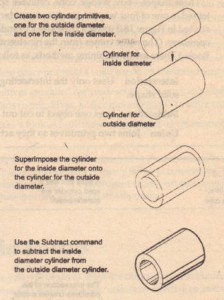 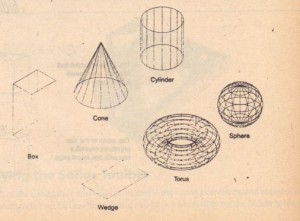 These shapes-box, wedge, cone, cylinder, sphere, and donut (or torus can be joined in one of four ways to produce secondary shapes. The first three, demonstrated in Figure 18.3 using a cube and a cylinder as examples, are called Boolean operations. (The name comes from the nineteenth-century mathematician George Boole.) There are three joining methods, as follows:

Intersection Uses only the intersecting region of two objects to define a solid shape.

Subtraction Uses one object to cut out a shape in another.

Union Joins two primitives so they act as one object. 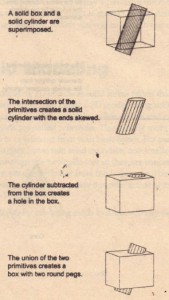 Now let’s take a look at how these concepts let us create models in AutoCAD.