Perhaps one of the most difficult things to do in manual drafting is to mark regular intervals on a curve. AutoCAD offers the Divide and Measure commands to help you perform this task with speed and accuracy.

The Divide command is used to divide an object into a specific number of equal segments. For example, suppose you needed to mark off the contour you’ve been working on in this chapter into nine equal segments. One way to do this is to first find the length of the contour by using the List command, and then sit down with a pencil and paper to figure out the exact distances between the marks. But there is another, easier way.
The Divide command places a set of point objects on a line, arc, circle, or polyline, marking off exact divisions. This next exercise shows how it works.

1. Open the file called 13a -di vd. dwg from the companion CD-ROM. This is a file similar to the one you have been working with in the prior exercises.
2. Choose Draw> Point> Divide, or type Div.J,
3. At the Select object to divide: prompt, pick the spline contour line.
4. The Enter number of segments or [Block]: prompt that appears next isasking for the number of divisions you want on the selected object. Enter 9-1.  The command prompt now returns, and it appears that nothing has happened. But AutoCAD has placed several points on the contour indicating the locations of  the nine divisions you have requested. To see these points more clearly, follow these steps:
S. Click Forrnat > Point Style. The Point Style dialog box appears.
6. Click the Xpoint style in the upper-right side of the dialog box, click the Set Size Relative to Screen radio button, and then click OK.
7. If the Xs don’t appear, choose View> Regen or enter Re..J.A set of Xs appear, showing the nine divisions

The Divide command uses point objects to indicate the division points. Point objects are created by using the Point command; they usually appear as dots. Unfortunately, such points are nearly invisible when placed on top of other objects. But, as you have seen, you can alter their shape using the Point Style dialog box. You can use these Xpoints to place objects or references to break the object being divided. (The Divide command does not actually cut the object into smaller divisions.) 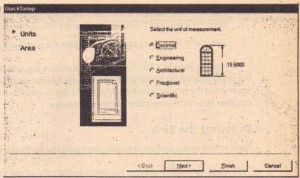 The Measure command acts just like Divide; however, instead of dividing an cbject into segments of equa1length, the Measure command marks intervals of a specified distance along an object. For example, suppose you need to mark some segments exactly 5′ apart along the contour. Try.the following exercise to See. how the Measure command is used to accomplish this task.
1. Erase the X-shaped point objects.
2. Choose Draw> Point> Measure, or type Me.J. \ ‘
3. At the Se1ect obj ect to measu re: prompt, pick the contour at ~ point closest to its lower endpoint. I’ll explain shortly why this is important.
4. At the Specify length of segment or [81ock): prompt, enter 6O.. The X / points appear at the specified distance.
5. Now exit this file

Bear in mind that &hepoint you pick on the object to be measured determines where the Measure command begins measuring. In the last exercise, for example, you picked the contour near its bottom endpoint. If you had picked the top of the contour” the results would have been different because the measurement would have started at the top, not the bottom.

Ma.rking Off Intervals Using Blocks Instead of Point.

Yell can also usethe Block option undef-ih~de anEtMeasure commands to ol.1Inkld at regular1nteNals along,a line, poIyIirle, or are, Here’s how to use
1. Its as to is part of the current
2. Starteither–the Divide O(Measure,command.
3. Atthe Specify langth of segment [Block] = prompt, enter
4. At the Enter name of block snsert: .
5. At the’ Align Block with Object? [Yes/No] : ‘prompt, press j if you wish.tht,< blocks to follow the alignment of the selected object, (Writing N.J causes each block:o be inserted at a O-degree angle.)’
6, At the Enter ‘the number of Segments: prompt, enter the’ number of segmehtS: The blocks aRpear at regular intervals on the selected object. One example of USi~g.nivide’s or Measure’s Bkxk optionis to place , spaced along a wall. \Or you fY\ight use this technique to make multiple topies, along an irregular path defined by a polyline. In civil projects, a fenieinecan be using Divide or Measure;to place a pOlyline:,