In step 3 of the last exercise you saw that you can specify an exact distance for the dimension line’s new location by entering a relative polar coordinate. Cartesian coordinates work just as well. You can even use object snaps to relocate dimension lines. Next, try moving the dimension line back using the Perpendicular Osnap.

In the next exercise, you will make a change to a single dimension’s style settings. Then you’ll use grips to move the dimension text away from the dimension line. 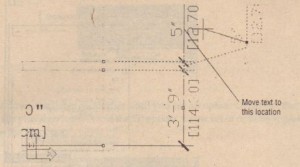 In the previous exercise, you changed the format setting of a single dimension after it was placed. These settings can be made a standard part of your Architectural dimension style by using the Modify button in the Dimension Style Manager dialog box .

Once in a while, a dimension text works better if it is kept in a horizontal orientation, even if the dimension itself is not horizontal. If you find you need to rotate dimension text, here’s the way to do it.

The Dimension Text Edit tool (Dimtedit command) also allows you to align the dimension text to either the left or right side of the dimension line. This is similar to the Alignment option in the Multiline Text Editor that controls text justification.

.A.s you have seen in this section, the Grips feature is especially well suited to , editing dimensions. With grips, you can stretch, move, copy, rotate, mirror, and scale dimensions.

One dimension text-editing tool you haven’t used yet is the Dimension Text Edit tool.

While it may sound as though this tool allows you to edit dimension text, its purpose is to allow you to quickly position dimension text to either the left right,or center of the dimension line. To use it, choose Dimension Text Edit·from the toolbar, then click the dimension text you want to move. You’ll see the prompt.

Click on a dimension and the Select dimension: Specify new location for dimension text or [Left/Right/Center/Home/Angle):

You can then enter the letter of the option you want. For example, if you enter I button the dimension text moves to the left side of the dimension line.

Editing Dimensions and Other Objects Together

Certainly it’s helpful to be able to edit a dimension directly using its grips, themselves to changes in the drawing. As long as you include the dimension’s definition points when you select objects to edit, the dimensions themselves will automatically update to reflect the change in your drawing.

To see how this works, try moving the living room closer to the bathroom wall. You can move a group of lines and vertices using the Stretch command and the Crossing option.

When you selected the crossing window comers, you included the definition points of both vertical dimensions. This allowed you to move the dimension extension lines along with the wall, thereby updating the dimensions automatically .

Adding a String of Dimensions with a Single

AutoCAD 2000 offers a method for creating a string of dimensions using a single operation. The Qdim command lets you select a set of objects instead of having to select points. The following exercise demonstrates how the Qdim command works .

The prompt in step 4 indicates several types of dimensions you can choose from. For example, if you want the dimensions to originate from a single baseline, you can enter B.J in step 5 to select the Baseline option.

The Qdim command can be a time-saver when you want to dimension a wall quickly. It may not work in all situations, but if the object you’re dimensioning is fairly simple, it may be all you need.

You may find that when you pick intersections and endpoints frequently, as during dimensioning, it is a bit inconvenient to use the Osnap popup menu. In situations where you know you will be using certain Osnaps frequently, you can use Running Osnaps. You can do so in the following two ways:

Once you’ve designated your Running Osnaps, the next time you are prompted to select a point, the selected Osnap modes are automatically activated. You can still override the default settings using the Osnap popup menu (Shift+click the right mouse button). You can toggle the Running Osnaps on or off by clicking the OSNAP label in the status bar, or by pressing F3. The toggle feature is especially helpful in crowded drawings where you may accidentally select an Osnap location while panning or zooming or selecting points for other operations. 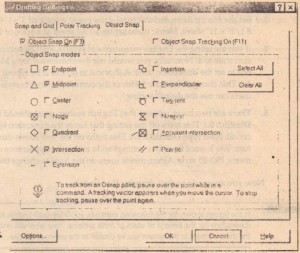