Viewing an object in three dimensions lets you have a sense of its true shape and form. It also helps you conceptualize the design, which results in better design decisions. Finally, using three-dimensional objects helps you communicate your ideas to those who may not be familiar with the plans, sections, and side views of your design.

A further advantage to drawing in three dimensions is that you can derive 20 drawings from your 3D model, which might otherwise take considerably more’time with standard 20 drawing methods. For example, you could model a mechanical part in 3D and then quickly derive its top, front, and right-side views using the techniques discussed in this chapter.

With surface modeling, you use two types of objects. One is called a 3D Face, which you will learn about later in this chapter. The other is the standard AutoCAO set of objects you’ve been using all along, but with a slight twist. By changing the thickness property of objects, you can create 3D surfaces. These surfaces, along with some 3D editing tools, let you create virtually any 3D form you may need.

In this chapter, you will use AutoCAD’s 3D capabilities to see what your studio apartment looks like from various angles.

By now, you are aware that AutoCAD objects have properties that can be manipulated to set color, line type, line weight, and layer assignments. Another property called thickness lets you turn two-dimensional objects into 3D forms. For example, to draw a cube, you first draw a square, and then change the thickness property of the square to some value greater than 0 (see Figure 15.1). This thickness property i~a value given as a z-coordinate. Imagine that your screen’s drawing area is he drawing surface. A z-coordinate of 0 is on that surface. A z-coordinate greater than 0 is a position closer to you and above that surface. Figure 15.2 illustrates this concept. 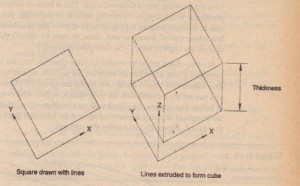 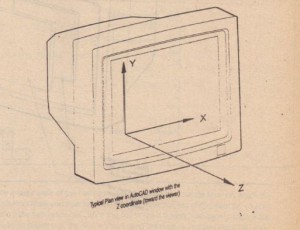 When you draw an object with thickness, you don’t see the thickness until you view the drawing from a different angle. This is because normally your view is perpendicular to the imagined drawing surface. At that angle, you cannot see the thickness of an object because it projects toward you just as a sheet of paper looks like a line when viewed from one end. Thus, to view an object’s thickness, you must change the angle at which you view your drawing.

Another object property related to 3D is elevation. You can set AutoCAD so that everything you draw has an elevation. By default, objects have a zero elevation. ‘This means that objects are drawn on the imagined 2D plane of Model Space, but you can set the z-coordinate for your objects so that whatever you draw is above . or below that surface. An object with an elevation value other than 0 rests not on the imagined drawing surface but above it (or below it if the z-coordinate is a negative value). Figure 15.3 illustrates this concept. 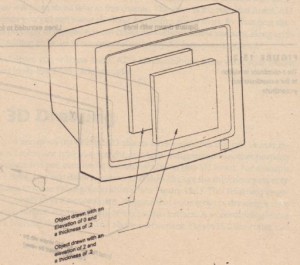 Changing a 2D Plan into a 3D Model

In this exercise, you will turn the 2D Unit drawing into a 3D drawing by changing the properties of the wall lines. You will also learn how to view the 3D image.

Figure 15.6 shows the extruded wall lines. You can see through the walls because this is a Wireframe view. A Wireframe view shows the volumes of a 3D object by showing the lines representing the intersections of surfaces. Later, this chapter will discuss how to make an object’s surfaces opaque in order to facilitate a particular point of view for a drawing.

In step 4, you were able to quickly obtain a 3D view from a set of 3D View options. You’ll learn more about these options as you progress through this chapter. 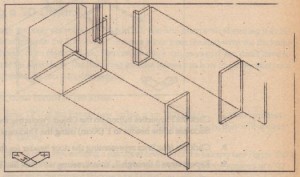 Next you will change the elevation of the door headers by moving them in the z-axis using grips.

You could have used the Move command to move the lines to their new elevation, entering the same @0,0,7 at the Specify second point of displacement or <use first point as displacement prompt for Move. Because you must select objects to edit them using grips, with the Move command, you save a step by not having to select the lines a second time for the Properties tool.

Though you may visualize a design in 3D, you will often start sketching it in 20 and later generate the 3D views you know from the start what the thickness and height of an object will be, you can set these values so that you don’t have to extrude the object later. The following exercise shows you how to set elevation and thickness before you start drawing.

Having set the thickness setting to 12 (30cm), everything you draw will have a thickness of 12 inches (30cm) until you change it back to 0 or some other setting.

Giving objects thickness and modifying their elevation is a very simple process, as you have seen. With these two properties, you can create nearly any three dimensional form you need. Next, you will discover how to control your view of your drawing.