Integrating AutoCAD into Your Projects and Organization AutoCAD Assignment Help

Integrating AutoCAD into Your Projects and Organization

AutoCAD offers a high degree of flexibility and customization, allowing you to tailor the software’s look and feel to your requirements. This chapter shows how you can adapt AutoCAD to fit your particular needs. You will learn how to customize AutoCAD by modifying its menus. You will learn how to create custom macros for commands that your work group uses frequently. You’ll look into the inner working of menu files line-type and hatch-pattern definitions, and you’ll learn to create new custom toolbars and tools.

The most direct way to adapt AutoCAD to your way of working is to customize the toolbars. AutoCAD offers new users-an easy route to customization. You can  create new toolbars customize tools and even create new icons. In this section you’ll discover how easy it is to add features to AutoCAD.

Taking a Closer Look at the Toolbars Dialog Box

1. Right-click the Draw toolbar and then select Customize. The Toolbars dialog pox opens. 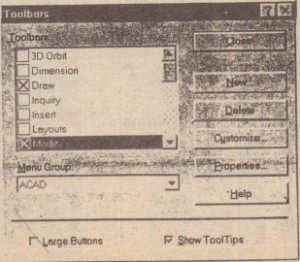 The Toolbars list box shows a listing of all the toolbars available in AutoCAD.

2. Scroll the list box up until you see Inquiry. Highlight it and then click the Properties button. The Toolbar Properties dialog box appears 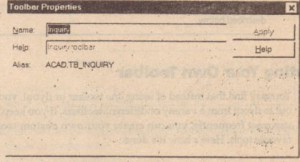 3. Click Close in the Toolbars dialog box to close both dialog boxes

As you can see from the Toolbar Properties dialog box you can rename a toolbar and alter its help message if you choose. Here are brief descriptions of some of the other options in the Toolbars dialog box

Typically.AutoCAD stores new toolbars and buttons in the Acad.mns file (see The Windows Menu Files sidebar later in this chapter). You can also store them in your custom menu files. Once you’ve created and loaded your menu file, as described in the section Adding Your Own Pull-Down Menu later in this chapter choose your menu from the Menu Group pull-down list in the New Toolbar dailog box described below

Creating Your Own Toolbar

You may find that instead of using one toolbar or flyout you are moving from flyout to flyout from a variety of different toolbars. If you keep track of the tools you use most frequently you can create your own custom toolbar containing your favorite tools. Here’s how it’s done.

1. Right-dick any icon in any toolbar then select Customize in the popup menu. The Toolbars dialog box opens.
2. Click the New button. The New Toolbar dialog box appears.

3.Enter My Toolbar in the Toolbar Name input box, and then click OK. A small blank toolbar appears in the AutoCAD window.

Notice that ACAD appears in the Menu Group list box and My Toolbar now appears in the Toolbars list box. You can now begin to add buttons to your toolbar. 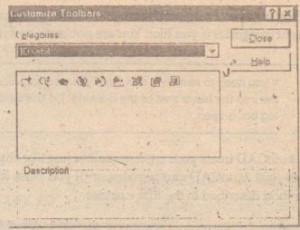 5.Open the Categories pull-down list. Notice that the 11 t contains the main categories of commands.
6.Choose Draw from the list. The list box displays all the tools available for the Draw category. Notice that the dialog box offers several additional arc and circle tools not found in the Draw toolbar.
7.Click the first tool in the top row: the Line tool. You’ll see a description of the tool in the Description box at the bottom of the dialog box.
8.Click and drag the Line tool from the Customize Toolbars dialog box into the new toolbar you just created. The Line tool now appears In your toolbar.
9.Click and drag the Arc Start End Direction tool to your  new toolbar 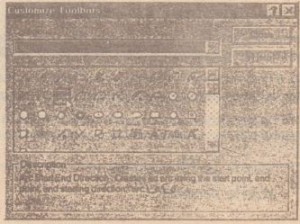 You now have a custom toolbar with two buttons. You can add buttons from different categories if you like. You are not restricted to buttons from one category.

If you need to remove a tool from your toolbar click and drag it out of your toolbar into the blank area of the drawing. Do this while the Customize Toolbars dialog box is open.

AutOCAD treats your custom toolbar just like any other toolbar. It appears when you start AutoCAD and remains until you close it. You can recall it by the same method described in the first exercise.

You may want to know how to open toolbars using the command line. This can be especially helpful if you want to create toolbar buttons that open other tool bars.
1.Type-Toolbar at the command prompt (don’t forget to inciude the minus sigO”alt the beginning of the toolbar command). .
2. ” At the Toolbar Name <A” >: prompt enter the name of the toolbar you want to open .
3.At the Show/Hi de/Left/Ri ght/TOP/BottCim)Fioat· <Show>: prompt, press..l. ‘The toolbar appears on the screen.