Learning the Tools of the Trade

This section explores some of the more common AutoCAD commands and shows you how to use them to complete a simple drawing. As you draw, watch the prompts and notice how your responses affect them. Also note how you use existing drawing elements as reference points.

While drawing with AutoCAD, you create gross geometric forms to determine the basic shapes of objects, and then modify the shapes to fill in detail. This is where the differences between drawing with AutoCAD and manual drafting become more .apparent. In essence, you alternately create and edit objects to build your drawing.

AutoCAD offers 14 basic drawing types, These are lines, arcs, circles, text, traces, poly lines, points, 3D Faces, ellipses, elliptical arcs, spline curves, solids, regions, and multi line text. All drawings are built on these objects. In addition, there are five different 3D meshes, which are three-dimensional surfaces composed of 3D Faces. You are familiar with lines and arcs; these, along with circles, are the most commonly used ” objects, As you progress through the book, you will learn about the other objects and how they are used.

Locating an Object in Reference to Others

To define the toilet seat, you will use an ellipse.

2. At the Specify axis endpoint of ellipse or [Arc/Center]: prompt, pick the midpoint of the bottom horizontal line of the rectangle. On this by bringing up the Osnap popup menu and selecting Mid point: then move the cursor toward the bottom line. (Remember, to bring up the Osnap menu, Shift+click the right mouse button.) When you see the Midpoint Osnap marker appear on the line, press the left mouse button. 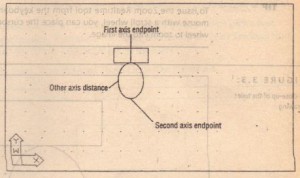 Getting a Closer Look

During the drawing process, you will want to enlarge areas of a drawing to more easily edit its objects. you already saw how the Zoom capability is used for this purpose.

1. Click the Zoom Window tool on the Standard toolbar, or type Z↵ W↵. You can also Choose View >- Zoom >Window.

3. At the Other corner: prompt, pick a point above and to the right of the drawing, at or near coordinate 8′-3″~6′-8″ (246.0000,1,95.0000 for metric users), so that the toilet is completely enclosed by the View window. To obtain this view, use the Zoom Window tool You can also use the Zoom Real time tool in conjunction with the Pan Real time tool. The toilet enlarges to fill from of the screen. 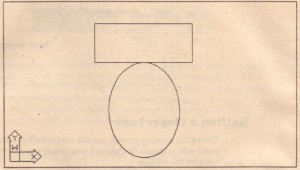 Now let’s see how editing commands are used to construct an object. To define the back edge of the seat, let’s put a copy of the line defining the front of the toilet tank 3″ (7 cm for metric users) toward the center of the ellipse.

1. Click the Copy Object tool in the Modify toolbar, or type co↵. You can also select Modify ⇒ Copy from the pull-down menu.

2. At the Select objects: prompt, pick the horizontal line that touches the top of the ellipse. The line is highlighted. Press ↵ to confirm your selection.
3. At the < Base point or displacement > Multiple: prompt, pick a base point near the line. Then move the cursor down until the Polar Tracking readout lists 0′-3″< 270 or 7.0000<270 for metric users.
4. Pick this point. Your drawing should look like. 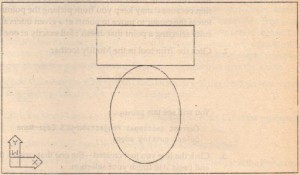 Notice that the Copy command acts exactly like the Move command you used, except that Copy does not alter the position of the objects you select.

1. First, turn the Snap mode off by pressing F9 or clicking the word snap the status bar. Snap mode may be a hindrance at this point in your editing session because it may keep you from picking the points you want, Snap mode forces the cursor to move to points at a given interval, so you will have difficulty selecting a point that doesn’t fall exactly at one of those intervals.

3. Click the line you just created-the one that crosses through the ellipse and press ↵ to finish your selection.

4. At the Select object to trim or [Project/Edge/Undo]: prompt,pick the topmost portion of the ellipse above the line. This trims the ellipse back to the line.

In step 2 of the previous exercise, the Trim command produces two messages in the prompt. The first prompt, Select cutting edges:, tells you that you must first select objects to define the edge to which you wish to trim an object. In step 4, you are again prompted to select objects, this time to select the objects to trim. Trim is one of a handful of AutoCAD commands that asks you to select two sets of objects: The first set defines a boundary, and the second is the set of objects you want to edit. The two sets of objects are not mutually exclusive. You can, for example, select the cutting edge objects as objects to trim. The next exercise shows how this works.

First you will undo the trim you just did; then you will use the Trim command again in a slightly different way to finish off the toilet. 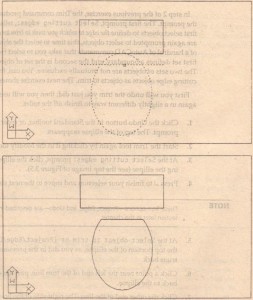 Here you saw how the ellipse and the line are both used as trim objects, as well as the objects to be trimmed.

AutoCAD offers three options for the Trim command: Edge, Project, and Undo. As described in the following paragraphs, these options give you a higher degree of control over how objects are trimmed.

Edge [E] Allows you to trim an object to an apparent intersection, even if the cutting-edge object does not intersect the object to be trimmed. Edge offers two options: Extend and No Extend. These can also be set using the Edge mode system variable.

Project [P] Is useful when working on 3D drawings. It controls how AutoCAD trims objects that are not coplanar. Project offers three options: None, UCS, and View. None causes Trim to ignore objects that are on different planes, so that only coplanar objects will be trimmed. If you choose UCS, the Trim command trims objects based on a Plan view of the current UCS and then disregards whether the objects are coplanar or not. View is similar to UCS but uses the current view’s “line of sight” to determine how non-coplanar objects are trimmed.

Undo [U] Causes the last trimmed object to revert to its original length.

You’ve just seen (me way to construct the toilet. However, there are many ways to construct objects. For example, you could have just trimmed the top of the ellipse, as you did in the first Trim exercise, and then used the Grips feature to move the endpoints of the line to meet the endpoints of the ellipse. As you become familiar with AutoCAD, you will start to develop your own ways of working, using the tools best suited to your style. 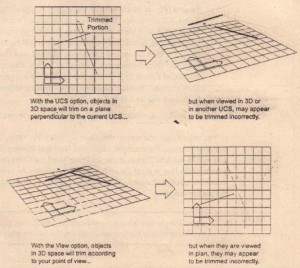