Before you apply any dimension, you’ll want to open the Dimension toolbar. This toolbar contains nearly all the commands necessary to draw and edit your dimensions.

Right-click any toolbar, At the popup menu, click Dimension from the list of toolbars. The Dimension toolbar appears.

In this exercise, you’ll add a vertical dimension to the right side of the Unit plan.

You will often want to enter a group of dimensions strung together in a line. For example, you may want to continue dimensioning the balcony and have the continued dimension aligned with the dimension you just entered. To do this, use the Continue option found in both the Dimension toolbar and the Dimension pulldown menu.

The Continue Dimension option adds a dimension from where you left off. The last drawn extension line is used as the first extension line for the continued dimension. AutoCAD keeps adding dimensions as you continue to pick points, until you press button.

You probably noticed that the last two dimensions you just added overlap each other. This is the result of the 5″ dimensions not having enough space to fit between the dimension extension lines. You’ll learn about dimension style settings that can remedy this problem. For now, let’s continue with adding dimensions to the plan.

Continuing a Dimension from a Previous Dimension

If you need to continue a string of dimensions from an older linear dimension,instead of the most recently added one, press button at the Specify a second extension line origin or (<select> /Undo): prompt you saw in step 2 of the previous exercise. Then, at the Select continued dimension: prompt.click the extension line from which you wish to continue. 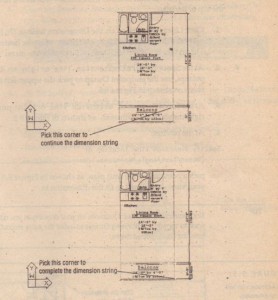