So farin this book, you’ve been using basic lines, arcs, and circles to create your drawings. Now it’s time to add polylines and spline curves to your repertoire. Polylines offer many options for creating forms, including solid fills. Spline curves are perfect for drawing smooth, nonlinear objects. The splines are true NURBS curves. NURBSstands for Non-Uniform Rational B-Splines

Polylines are like composite line segments and arcs. A polyline may look like a series of line segments, but it acts like a single object. This characteristic makes polylines useful for a variety of applications, as,you’ll see in the upcoming exercises.

First, to introduce-you to the polyline, you will begin a drawing of the top view of  the joint

1. Open a new file and save it as Joi nt2d. Don’t bother to make special setting changes, because you will do this drawing with the default settings.
2. Set the limits to 0,0 for the lower-left comer and 12,9 for the upper-right corner, then choose View >- Zoom >- All or type Z.J A.J.
3. Click the Polyline tool on the Draw toolbar, or type Pl.
4. At the Speci fy start poi nt: prompt, enter a point at coordinate 3,3 to start your polyline.
5. At the Specify next point or [Arc/Close/Halfwidth/Length/Undo/ .W.i dth] : prompt, enter @3<O.Jto draw a horizontal line of the joint.
6. At the prompt
enter A.J to continue your polyline with an arc.
7. At the prompt
8. Continue the polyline with another line segment. To do this, enter L.J.
.9. At the prompt

Younow have a sideways, U-shaped polyline that you will use in the next exercise to complete the top view of your joint. 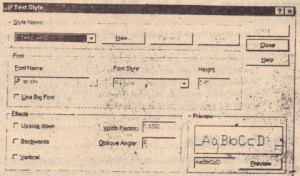 Close Draws a line segment from the last endpoint of a sequence of lines to the first point picked in that sequence. This works exactly like the Close option for the Line command.

Length Enables you to specify the length of a line that will be drawn at the same angle as the last line entered.

Halfwidth Creates a tapered line segment or arc by specifying half its beginning and ending width.

Width Creates a tapered line segment or arc by specifying the full width of the segment’s beginning and ending points.

If you want to break down a polyline into simple lines and arcs, you can use the Explode option on the Modify toolbar, just as you would with blocks. Once a polyline is exploded, it becomes a set of individual line segments or arcs.

In addition, there are many editing capabilities offered only for polylines. For instance, later in this chapter you will see how to smooth out a polyline using the Curve Fit option in the Pedit command and the Modify Polyline dialog box. In the next exercise, you’ll use the Offset command on the Modify toolbar to add the inside portion of the joint

polyline, and the Trim, Extend, and Break commands on the Modify toolbar alsowork with polylines. In addition,  there are many editing capabilities offered only for polylines. For instance, later in this chapter you will see how to smooth out a polyline using the Curve Fit option in the Pedit command and the Modify Polyline dialog box. In the next exercise, you’ll use the Offset command on the Modify toolbar to add the inside portion of the joint.

1 Click the Offset tool in the Modify tpolbar, or type O.J.
2 At the Specify offset d; stance or [Th rough] <1. 0000>: prompt, enter 1.
3 At t ie Select object to offset or <ex; t>: prompt, pick the V-shaped
polyline you just drew.
4 At the Specify point on s; de to offsat: prompt, pick a pointtoward the inside of the V.A concentric copy of the polyline appears.
5 Press .J to exit the Offset command.

The concentric copy of a polyline made with Modify >Offset can be very useful when you need to draw complex parallel curves like the ones . Next, complete the top view of the joint. 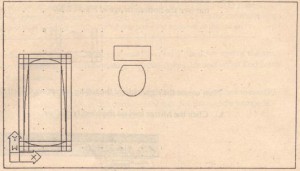 3 At the Se1ect pol yl; ne: prompt, pick the outermost polyline.
At the prompt
4 Enter option [Close/Join/Width/Edit vertex/Fit/Spline/
Decurve/ltype gen/Undo):
enter J..1 for the Join option.
5 At the Select obj ects prompt, select all the objects you have drawn so far.
6 Once all the objects are selected, press ..1 to join them all into one polyline.
7 It appears that nothing has happened, though you will see the message 4 segments added to pol yl ine in the Command window. The 4 segments in the message are the 4 objects in your drawing.
8 . Press↵ again to exit the Pedit command.
8. Click the drawing to expose its grips. The entire object is hightlighted, telling you that all the lines have been joined into ~ single polyline.

By using the Width option under Edit Polyline, you can change the thickness of a polyline. Let’s change the width of your polyline, to give some thickness to the outlltle of the joint.

4. At the Ente r new width for all segments: prompt, enter .03..Jfor the new width of the polyline. The line changes to the new width,and you now have a top view of your joint.
5. Press ..J to exit the Pedit command.
6. Save this file.

Now here’s a brief look at a few of the Pedit options you didn’t try firsthand:

Close Connects the two endpoints of a polyline with a line segment. If the polyline you 3ed to be edited is already closed, this option changes to Open.

Open Removes the las segment added to a closed polyline.
Spline/Decurve Smooths a polyline into a spline curve (discussed in detail later in this chapter).

Edit Vertex Lets you editeach vertex of a polyline individually (discussed in detail in the next section).

Fit Turns polyline segments into a series of arcs.