One element of your drawing that is missing is a cross-section. AutoCAD will draw a cross-section through any part of the solid model. In the following exercise, you will draw such a cross-section.
1. First, save your drawing so you can return to this stage (in case you don’t want to save the results of the following steps).
2. Choose Tools> New UCS > World.
3. Click the Section tool on the Solids toolbar
4. At the Select obj ects: prompt, click both halves of the solid model and press .J.
5. At the prompt enter ZX.J. This tells AutoCAD you want to cut the solid in the plane defined by the x- and z-axes.
6. At the Po; nt on ZX plane: prompt, pick the midpoint of the top-right surface of the solid 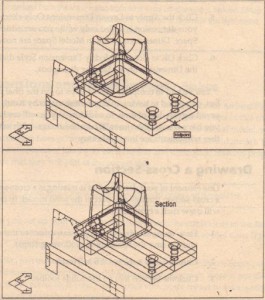 The section shown in the bottom image of Figure 18.48 is a type of object called a region. In the next section, you’ll learn how regions share some characteristics with 3D Solids.

You c•an apply of some of the features described in this chapter to 20 drafting by taking advantage of AutoCAD’s region object. Regions are two-dimensional objects to which you can apply Boolean operations.

1. If you have been working through the tutorial on 3D solids, save the Bracket drawing now.
2. Open the Reg; on. dwg drawing supplied on the companion CD-ROM. You will see the drawing shown in the top image. The objects in this drawing are circles and closed polylines .
3 Click the Region tool on the Draw toolbar, or type Reg↵.
4. At the Se1ect obj ects: prompt, click all the objects in the drawing and press .J. AutoCAD converts the objects into regions.
5. Move the two circles and the hexagons into the positions illustrated in the bottom image of Figure 18.49. (For this demonstration exercise, you don’t have to worry about matching the positions exactly.)
6. Choose Modify >- Boolean >- Union.
7. At the Select objects: prompt, click the rectangle and the two circles. The circles merge with the rectangle to form one object.
8. Choose Modify >- Boolean >- Subtract, and then click the newly created region and press↵.
9. At the next Se1ect obj ects: prompt, click the two hexagons. Now you have a single, 2D solid object in the shape of a wrench.

You can use regions to generate complex surfaces that might include holes or unusual bends. There are two things you should keep in mind:

• Regions act like surfaces; when you remove hidden lines, objects behind the regions are hidden.
• You can explode regions to edit them. (You can’t do this with solids.) However, exploding a region causes the region to lose its surface-like quality, and . objects will no longer hide behind its surface 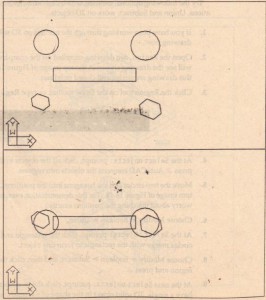