In your work with 3D so far in this chapter, you have simply extruded existing forms, or you have set AutoCAD to draw extruded objects. But extruded forms have their limitations. Using just extruded forms, it’s hard to draw diagonal surfaces in the z-axis. AutoCAD provides the 3D Face object to give you more flexibility in drawing surfaces in three-dimensional space. The 3D Face produces a 3D surface where each comer can be given an x, y, and z value. By using 3D Faces in conjunction with extruded objects, you can create a 3D model of just about anything. When you view these 3D objects in a 2D Plan view, you will see them as 2D objects showing only the x and y positions of their corners or endpoints.

Before you start working with 3D surfaces, you should have a good idea of what the z-coordinate values are for your model. The simplest way to construct surfaces in 3D space is to first create some layout lines to help you place the endpoints of 3D Faces.

AutoCAD offers a method for 3D point selection, called filtering, that simplifies the selection of z-coordinates. Filtering allows you to enter an x, y, or z value by picking a point on the screen and telling AutoCAD to use only the x, y, or z value of that point, or any combination of those values. If you don’t specify a z-coordinate, the current elevation setting is assumed.

In the following exercises, let’s imagine you decide to add a new two-story unit to your apartment design. You will add a stair rail to the studio apartment to access that second floor. In doing this, you will practice using 3D Faces and filters. You’ll start by doing some setup, so you can work on a copy of the Unit file and keep the old Unit plan for future reference.

Now you are ready to layout your stair rail.

Now you will copy the line vertically to draw the top of the stair rail.

In step 4 you specified that the second point used the same x-coordinate and y-coordinate of the base point, so you only needed to enter the z value for the second point-In the earlier exercise, you used a relative coordinate to move door headers to a position 7 higher than their original location. You could have used the same method here to copy the line vertically, but in this exercise you got a
chance to see how the point filter works .

The 3DFace command and AutoCAD’s 3D shapes are located in the Surfaces toolbar. Right-click any toolbar, then click Surfaces in the popup menu:

Now that you’ve opened the Surfaces toolbar, you can begin to draw 3D Faces.

When using the 3DFace command, you are limited to drawing surfaces with four sides. You can, however, create more complex shapes by simply joining several 3D Faces. Figure 15.24 shows an odd shape constructed of three joined 3D Faces. Unfortunately, you are left with extra lines that cross the surface as shown in the top image of Figure 15.24;but you can hide those lines by using the Invisible option under the 3D Face command, in conjunction with the Splframe variable. 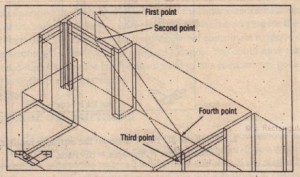 To make an edge of a 3D Face invisible, start the 3DFace command as usual. While selecting points, just before you pick the first point of the edge to be hidden, enter 1..J as shown in the bottom image of Figure 15.24. When you are drawing two 3D Faces sequentially, only one edge needs to be invisible to hide their joining edge.

You may have noticed that the Surfaces toolbar offers several 3D surface objects, such as cones, spheres, and torus (donut-shaped). All are made up of 3D Faces. To use them, click the appropriate button on the Surfaces toolbar. When you select an object, AutoCAD prompts you for the points and dimensions that define that
3D object; then AutoCAD draws the object. This provides quick access to shapes that would otherwise take substantial time to create.

Turning a 3D View into a 2D AutoCAD Drawing

There are many architectural firms that use AutoCAD 3D models to study their designs. Once a specific part of a design is modeled and approved, they convert the model into 2D elevations, ready to plug into their elevation drawing.

At the end of Chapter 11, you learned about a method you can use to convert a 3D model into a 2D AutoCAD drawing. If you need more accuracy in the conversion, configure the AutoCAD Plotter for an AD! Plotter. Set it up to plot a .dxb file. Your plots then generate .dxb files, which you can import using the Insert > Drawing Exchange Binary option in the menu bar. This opens the Select DXBFile dialog box from which you can select the appropriate .dxb file.