AutoCAD provides several predefined hatch patterns you can choose from (see Figure 20.9) but you can also create your own. This section demonstrates the basic elements of pattern definition.
Unlike line types hatch patterns can not be created while you are in an AutoCAD file. The pattern definitions are contained in an external file named Acad. pat. This file can be opened and edited with a text editor that can handle ASCn files such as the Windows Notepad. Here is one hatch pattern definition from that file:

A pattern is made up of line groups. A line group is like a line type that is arrayed a specified distance to fill the area to be hatched. A line group is defined.by a line of code much as a line type is defined. In the square pattern for instance two linesone horizontal and one vertical-are used. Each of these lines is duplicated in a fashion that makes the lines appear as boxes when they are combined. Figure 20.11 illustrates this point.

Look at the first line in the definition

This example shows a series of numbers separated by Commas it represents one line group. It actually contains four sets of information separated by blank spaces:
• The first component is the 0 at the beginning. This value indicates the angle of the line group as determined by the line’s orientation. In this case it is 0 for a horitontalline that runs from left to right.
•The next component is the origin of the line group 0 O. This does not mean that the line actually begins at the drawing origin (see Figure 20.12). It gives you a reference point to determine the location of other line groups involved in generating the pattern.

If you have forgotten the numeric values for the various directions refer back to Figure 2.4 in Chapter 2 which shows AutoCAO’s system for specifying angles. 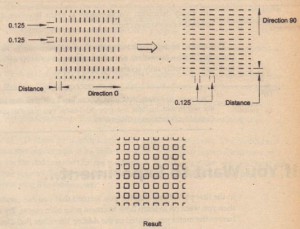 The last component is the actual description of the line pattern. This value is  equivalent to the value given when you create a line type. Positive values are line segments and negative values are blank segments. This part of the

line-group definition works exactly as in the line-type definitions you studied in the previous section.

This system of defining hatch patterns may seem somewhat limiting but you can actually do a lot with it. Autodesk managed to come up with 53 patterns and that was really only scratching the surface.

If you want to include thick lines in your hatch patterns you have to “build up” line widths with multiple line-type definitions. You may also use the Super Hatch Express tool discussed in Chapter 19.

In the first part of this chapter you learned that you can create your own toolbars then you went on to learn how to create yow’ own menu. Try adding custom toolbars to the menu you created in the Adding Your Own Pull-Down Menu section.
1. If you haven’t done so already, load the Mymenu mnu file into the AutoCAD menu bar.
2. Right-click a button in any toolbar, then select Customize in the popup menu  The Toolbars dialog box opens.
3. Select Mymenu from the Menu Group d{op-down list.

Since you don’t have toolbars coded into your menu file, the Toolbars list box is empty. The next step is to add a toolbar to your custom menu.

Posted on November 9, 2015 in Integrating AutoCAD into Your Projects and Organization