As you learned earlier, you can convert a polyline into a solid using the Extrude option on the Solids toolbar. This process lets you create more complex primitives. In addition to the simple straight extrusion you’ve already tried, you can also extrude shapes into curved paths, or you can taper an extrusion.

Next, you’ll take a look at how you can taper an extrusion to create a fairly complex solid with little effort. 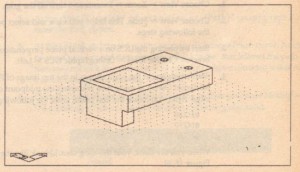 Extruding on a Curved Path

As demonstrated in the following execise, the Extrude command lets you extrude virtually any polyline shape along a path that is defined by a polyline, arc, or 3D polyline. .

At this point, you’ve created the components needed to do the extrusion, Next, you’ll finish the extruded shape. .

In this exercise, you used a curved polyline for the extrusion path, but you can use any type of 2D or 3D polyline, as well as lines and arcs, for an extrusion path.

When your goal is to draw an object that is circular, the Revolve command on the Solids toolbar is designed to let you create a solid that is revolved, or swept in a circular path. Think of Revolve’s action as similar to a lathe that lets you carve a shape from a spinning shaft. In this case, the spinning shaft is a polyline, and rather . than carving it, you define the profile and then revolve the profile around an axis.

In the following exercise, you will draw a solid that will form a slot in the tapered solid.

You have just created a revolved solid that will be subtracted. from the tapered box to form a slot in the bracket. But before you subtract it. you need to make a slight change in the orientation of the revolved solid.