In the previous example, you drew a chair composed of objects that were mostly straight lines or curves with a thickness. All the forms in that chair were defined in planes perpendicular to each other. For a 3D model such as this, you can get by using the Orthographic UCSs. At times, however, you will want to draw objects that do not fit so easily into perpendicular or parallel planes. The following exercise demonstrates how you can create more complex forms using some of Auto-CAD’s other 3D commands.

Laying Out a 3D Form

In this next group of exercises, you will draw a butterfly chair. This chair has no perpendicular or parallel planes to work with, so you will start by setting up some points that you will use for reference only. This is similar in concept to laying out a 20 drawing. You will construct some temporary 3D lines to use for reference. These temporary lines will be your layout. These points will define the major UCSS needed construct the drawing. As you progress through the drawing construction, notice how the reference points are established to help create the chair.

1. If it isn’t open already, open the Barcelon drawing, and then use Pile >Save As to save the file under the name Btrfly.

3. Erase the entire contents of the drawing, and then make sure you are in the WCS by choosing Tools > UCS :> World.

7. Choose View >3D Viewpoint >SW Isometric. This will give you a view from the lower-left side of the rectangles.

8. Zoom out so the rectangles occupy about a third of the drawing area window. 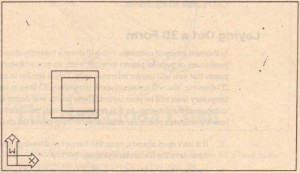 Now you need. to move the outer rectangle in the z-axis so that i~ elevation is 30″ (76 cm for metric users).

1. Click the outer rectangle, and then click one of its grips.
2. Right-click to open the Grip Edit popup menu.
3. Select Move, and then enter @O,0,30↵. Metric users should enter @O,O,76↵. This tells AutoCAD to move the rectangle a 0 distance in both the x- and y-axis, and 30″ (or 76 cm) in the z-axis.
4. Pan your view downward so it looks similar.
5. Use the Line tool and draw lines from the corners of the outer square to the corners of the inner square, as shown.Use the..Endpoint Osnap to select the exact corners of the squares. This is the layout for your chair-not yet the finished product. 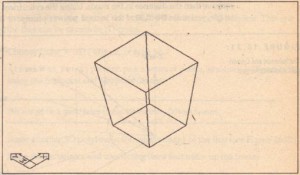 In the foregoing exercise, you used relative Cartesian coordinates to locate the second point for the Move command. For commands.that access > 3D input, you can also specify displacements by using the Spherical and Cylindrical Coordinate formats. 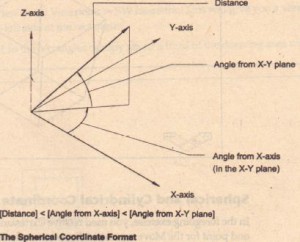 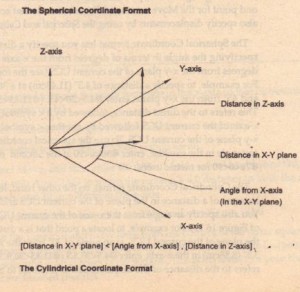 Now you will draw the legs for the butterfly chair using a 3D polyline. This is a polyline that can be drawn In 3D space.

2. At the First point: prompt, pick a series of points, as shown using the Endpoint and Midpoint Osnap.

3. Draw another 3D polyline in the mirror image of the first.

4. Erase the rectangles and connecting lines that make up the frame. 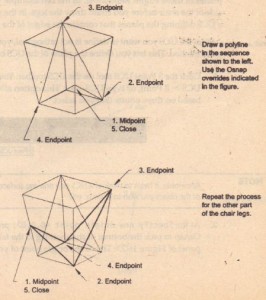 All objects, with the exception of lines, 3D Faces, 3D Meshes, and 3D polylines, are restricted to the plane of your current ucs. The Pline command can only be used to draw polylines in one plane, but the 3D Poly command allows you to create a polyline in three dimensions. Three-dimensional poly lines cannot, however, be given thickness or width ..