Three-dimensional graphics are often handy for presentations, and 3D AutoCAD images are frequently used for that purpose, as well as for producing.drafted 2D drawings. You may want to show off some of your 3D work directly from the computer screen. However, if your drawings are complicated, your audience may get impatient waiting for the hidden lines to be removed. Fortunately, AutoCAD provides two commands that let you save a view from your screen in a form that will display quickly.

The Mslide and Vslide commands both save a view as a file on disk. Such a view is called a slide. You can display a slide any time you are in the AutoCAD drawing editor. Slides display at redraw speed, no matter how complex they may be. This means you can save a slide of a hidden-line view of your 3D drawing and recall that view quickly at any time.

Slides can also be used for reference during editing sessions, instead of palming, zooming, or viewing. A slide cannot be edited, however, nor will it be updated when you edit the drawing.

In the following exercise, you will make a few slides of the Unit file.

Now that you’ve saved two views, let’s see how to view them.

Next, you’ll get to see how you might automate a slide presentation using the slides you just created.

As mentioned in Chapter 7, Script (fools> Run Script) can be used to run a sequence of commands automatically. Let’s create a script file to automatically show the slides you made in the last exercise.

A script file is really nothing more than a list of “canned” AutoCAD commands and responses. In this example, you’ll add the Delay command, whose sole function is to pause a script for a specific length of time.

These lines are a sequence of predetermined instructions to AutoCAD that canbe played back later. Save this file in the same place where your slide files are located. When you play this script file, each line is entered at the AutoCAD command prompt, just as you would enter it through the keyboard. Notice that the Vslide command is executed before each slide, which is then followed by the line delay 3000, which tells AutoCAD to pause roughly 3,000 milliseconds after each Vslide command is issued (you can substitute another value if you like). If no delay is specified, the next slide comes up as soon as the previous slide is completed.

You can also have the slides repeat themselves continuously by adding the Rscript command at the very end of the Show. scr file. You may want to do this in a presentation intended for casual viewing, such as an exhibit in a display area with people passing through. To stop a repeating script, press the Backspace key.

The slides you saved will appear on the screen in the sequence in which you entered them in the Show. scr file.

You can group slide files together into one file to help keep your slides organized for example, by project or by drawing type. Slide libraries also save disk space, since they often require less space than the total consumed by the individual slide files.

Slide files are also used to create custom dialog boxes that show sample views of objects. An example of such a dialog box is the 3D Objects dialog box, which is displayed when you select Draw > Surfaces > 3D Surfaces. 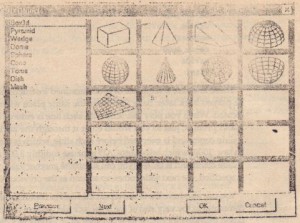 Now let’s test your slide library. To view a slide from a slide library, you use the Vslide command. This time, however, you will specify the filename differently. Instead of picking a slide name from the dialog box, you must enter the name at the prompt line in a special format. The name must be entered with the library name first, followed by the individual slide name in parentheses.

To use slide, libraries from a script, you use the slide library and slide name following the Vslide command, as in the following example:

You’ve seen how you can save and display 3D views quickly and how you can automate a presentation of slides using scripts. With these tools, you can create an impressive, fast-paced presentation,

Architects traditionally use 3D models made from cardboard or chipboard to help others visualize their ideas. And if you’ve ever taken a class in architectural design, chances are you’ve had to make such a model yourself. 3D modeling on a computer is faster and a lot more fun than creating a physical chipboard model, and in some cases it can show you things that a physical model cannot.

The following exercise is really just for fun. It shows you how to do a limited form of animation, using View> 3D Viewpoint, the Mslide command, and scripts.

You might also want to try creating an animation that moves your completely around the Unit plan.

Here’s another suggestion for experimenting: To practice drawing in 3D, turn the kitchen of your 3D Unit drawing into a 3D object. Make the cooking top 30″ high and add some cabinet doors.