In mechanical drafting, tolerances are a key part of a drawing’s notation. They specify the allowable variation in size and shape that a mechanical part can have. To help facilitate tolerance notation, AutoCAD provides the Tolerance command, which offers common ISO tolerance symbols together with a quick way to build a standard
feature control symbol. Feature control symbols are industry-standard symbols used to specify tolerances. If you are a mechanical engineer or drafter, AutoCAD’s tolerance notation options will be a valuable tool. However, a full discussion of tolerances requires a basic understanding of mechanical design and drafting and is beyond the scope of this book.

This is where you enter tolerance and datum values for the feature control symbol. You can enter two tolerance values and three datum values. In addition, you can stack values in a two-tiered fashion.

If you click a box in the Sym group, the Tolerance Symbol dialog box appears .

The top image of Figure 9.22 shows what each symbol in the Tolerance Symbol dialog box represents. The bottom image shows a sample drawing with a feature symbol used on a cylindrical object..

In the Geometric Tolerance dialog box, if you click a box in any of the Datum groups, or a box in the right side of the Tolerance groups; the Material Condition dialog box appears. . 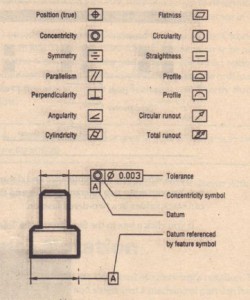 At this point, you might want to experiment with the settings described. in this chapter to identify the ones that are most useful for your work. You can then establish these settings as defaults in a prototype file or the Acad. dwt file.

It’s a good idea to experiment even with the settings you don’t think you will need often-chances are you will have to alter them from time to time.

As an added. exercise, try the steps shown in Figure 9.23. This exercise will give you a chance to see how you can update dimensions on a drawing that has been scaled. down. 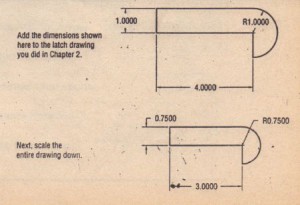